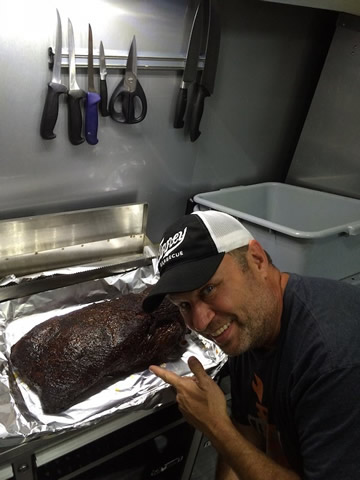 Jay Tinney has had a love for cooking since his college days at Texas Tech University. He found out early on that if he was going to enjoy home cooked meals, he was going to have to figure out a way to cook for himself. He enjoyed finding the right ingredients to make a dish taste even better than the original recipe whether it be macaroni and cheese or a grilled steak. Through the years, he has been known for entertaining friends and family with his individual flair in all of the food he serves at his table.

In 2004, Jay started to follow his passion for cooking by entering barbecue competitions all over the state. In his first sanctioned competition in Taylor, Texas, he brought home a 5th place ribs award with over 100 entries. After that day, the excitement began. Jay frequents cook-offs all over the state and continues to bring home awards.

He will also be our very own pitmaster for our upcoming tailgate on October 13, 2018 for the Texas vs. Baylor game! We hope to see you there!

1. Tinney Barbecue has had such a great year, what have these accomplishments meant for you and Tinney Barbecue?
They have meant the world to us personally and for the business. We won the 2018 San Antonio Rodeo Cook Off, the largest cook off in the state, with 306 barbecue teams. We won first place brisket and received the coveted Grand Champion Award. This qualifies us automatically to cook in the Champions Corner in the Houston Livestock Show and Rodeo in 2019. We are super excited about this opportunity. We also were invited to cook for all the U.S. Senators on Capitol Hill this year at a bipartisan luncheon. 85 of the 100 U.S. senators were in attendance and gave us a standing ovation. This was very exciting and humbling to be a part of this annual event.

We just got back from cooking the American Royal Barbecue contest in Kansas City, and we were one of the few Texas teams to get a call. We actually got a brisket call in the Invitational Cook off which featured 165 of the best barbecue teams in the world. These teams had to be invited to come cook so this was quite an honor for us and a bucket list for sure!

Another good win for us was first place brisket this year during the Dripping Springs Founders Day Festival. These awards mean a lot to Tinney Barbecue because we bring our competition style barbecue recipes and use those for catering. It allows people to taste barbecue that they normally wouldn’t get at just any salt and pepper type barbecue restaurant.

2. What was it like to be featured on a Travel Channel episode?
It was an awesome experience that took me out of my comfort zone. Everything is blind meaning that you have no idea what ingredients they will provide. You have to run into a kitchen, grab ingredients, prepare the dish and plate it with a nice presentation in a very short period of time. This was a lot of fun but challenging. We didn’t win, but we had a great time and learned a lot.

3. You’ve won so many awards! If you had to pick, which was your favorite cook-off or competition to compete in?
Winning Grand Champion at the San Antonio Barbecue Cook Off in 2018 is definitely the highlight of my barbecue career. To hit first place brisket out of 306 teams was just crazy exciting!

4. How do you maintain a fun atmosphere when cooking and competing as the pit-master?
We always maintain a fun atmosphere by listening to some great music while we are cooking! We love putting on a little Cody Jinks and maybe some old school John Lee Hooker. Combine that with a few beers and that is a recipe to keep the day light and fun. Life is too short not to have a great time every day we are above ground!

5. What events do you have coming up that you are looking most forward to?
One of the largest events coming up is the IBCA Showdown in Kingsville. It is a giant cook off that is going to happen at the end of October. It has a giant $65,000 payout. All of the competition cooks in Texas are very excited about that particular one. Also I am very excited to try and repeat as the Grand Champion of the San Antonio Rodeo Cook off in January and then go on to compete in the Houston Livestock Show and Rodeo in February in Champion's Corner.

6. What would you say are some of the most popular meats or fixin's at Tinney Barbecue?
The brisket is what everybody wants at their events, and we also have had great success doing our Butter Bath Chicken cooked on-site at large events. Another dish that is popular and people rave about is our stuffed quail. It is stuffed with different kinds of sausage, cheese and jalapeños and topped off with an apple habanero glaze.

7. You’re known for finding that perfect combination of ingredients to improve any recipe, what is your go-to ingredient combo when cooking?
That is a hard one to say because I use a multitude of different ingredients and layers of rubs that I have been perfecting over the years with many different products.

Check out where you can get some of Jay’s award winning barbecue here! We are excited to have Jay as our tailgate pit master this week. We will be sharing his process and creations on our Instagram profile. Follow us for live updates from the tailgate!